Adding Color to the Corner

A single line taken from English professor Rita Dove’s poem, “Testimonial,” anchors the colorful mural and invites students to think about how they will use their UVA education.

"The world called, and I answered.”

That line, written by University of Virginia English professor and former U.S. Poet Laureate Rita Dove, is the centerpiece of a new mural gracing an exterior wall of the Graduate Charlottesville hotel on University Avenue. It comes from Dove’s poem, “Testimonial,” originally published in her book, “On the Bus with Rosa Parks.”

The new mural, painted by muralist David Guinn and publicly dedicated on Tuesday, occupies a prominent place within the bustling Corner shopping district directly adjacent to UVA’s Grounds. Created with support from the Office of the Provost and the Vice Provost for the Arts, it is the third and largest mural in a Paint & Poetry Series led by two local arts groups, the Charlottesville Mural Project and New City Arts.

Dove, a decorated poet who has published numerous anthologies and short story collections, had plenty of material to choose from. She and Guinn felt that the line from “Testimonial” best captured the mission of UVA and its students.

Guinn began painting the mural in June and gradually brought to life a colorful, abstract design intended to capture the optimism of Dove’s poem.

“I wanted to express the emotion that I felt in Rita Dove’s ‘Testimonial’ with its beautiful exuberance and optimism, its enthusiasm for, and wonder at, life,” Guinn said in a press release. “This is the spirit that I wanted to communicate to the UVA community. The design creates a space for the viewer’s mind to enter and connect with that spirit.”

Guinn, pictured above, has painted more than 35 murals around the world, including several in his hometown of Philadelphia and works in Amman, Jordan; Montreal; Chicago; Washington, D.C.; and New York. This is his first mural in Charlottesville.

UVA students have long been interested in public art on the Corner, and had previously asked the Charlottesville Mural Project about adding murals to walls abutting the nearby railroad tracks. Railroad regulations preclude that possibility, but the hotel – built as a Howard Johnson, later a Red Roof Inn and newly renovated and rechristened as The Graduate – occupies one of the Corner’s most visible sites and offered a great alternative.

A few days ahead of the mural’s dedication, Dove joined Guinn on scaffolding high above the corner to fill in the last unpainted word, “world.”

Dove, pictured with Guinn, said that murals, like poetry, can make viewers pause and take stock of the world around them.

“We walk along in our normal lives, being irritated by the stuff we are normally irritated by, and then a mural – or poetry – can stop us in our tracks and remind us of the here and now, of both the intimacy of the human spirit and the expansiveness of the world,” she said. “Murals do that even without words. When you add words, that effect intensifies.”

Dove served as the U.S. Poet Laureate from 1993 to 1995 and has won numerous literary and academic honors. She is the only poet to have been awarded both the National Humanities Medal, presented to her by President Clinton in 1996, and the National Medal of Arts, presented by President Obama in 2011. Last week, however, marked the first time that she had painted her own words on the side of a building.

During Tuesday’s dedication, Guinn and Dove each signed the mural, putting the finishing touch on the project after two months of painting, and many more hours spent designing and planning the mural.

High above University Avenue, the mural is now visible from Grounds, adding a colorful element to the tableau of art and architecture that UVA students and visitors enjoy each day.

The full text of “Testimonial” reads:

Back when the earth was new

and heaven just a whisper,

back when the names of things

hadn’t had time to stick;

back when the smallest breezes

when all the poplars quivered

sweetly in rank and file…

the world called, and I answered.

Each glance ignited to a gaze.

I caught my break and called that life,

swooned between spoonfuls of lemon sorbet.

I was pirouette and flourish,

I was filigree and flame.

How could I count my blessings

when I didn’t know their names?

Back when everything was still to come,

I gave my promise to the world,

and the world followed me here. 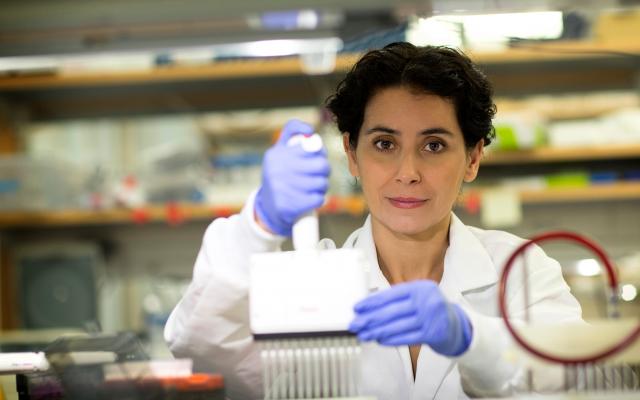 Eyleen O’Rourke and colleagues are creating the first computer simulation of an entire living organism to better understand genetics, environment and disease.