“How do you want to be active and be part of a bigger cause?”

Seated on the Paramount Theater stage in front of hundreds of first-year Arts & Sciences students and other members of the University of Virginia community on September 30th, Chicago artist Nick Cave recalled his own undergraduate days at the Kansas City Art Institute. Now an internationally celebrated artist who blends sculpture, installations, fashion design, performance and video in his work, Cave recounted the creative energy and competitive spirit that fueled the impromptu spectacles that he and his classmates staged on the Institute’s campus and beyond more than three decades ago.

“I would just gather my friends and make happenings throughout the city,” said Cave, recounting the parades and performances that took over Kansas City’s expressways and other public spaces. “That sort of gave me an understanding of this vast platform that’s outside of the institutions and other schools that we’d go to. How do you want to be and live in the world?

“How do you want to be active and be part of a bigger cause?”

Invited by the College and Graduate School of Arts & Sciences to serve as the first keynote speaker of this academic year’s Engagement Lecture Series, Cave was joined on stage by UVA art professor William Wylie for a wide-ranging conversation about the inspirations behind Cave’s large-scale works and an artist’s role in democratic society. Previous Engagement Lecture Series talks were delivered last year by UVA alumna and Hidden Figures author Margo Lee Shetterly, artist Mark Dion and Harvard professor of ethics Danielle Allen.

The lecture series serves as a component of the New Curriculum, now in its second year of its pilot phase within the College of Arts & Sciences. Close to 800 first-year students opted to enroll this fall in the New College Curriculum, an increase of more than 200 from last year. 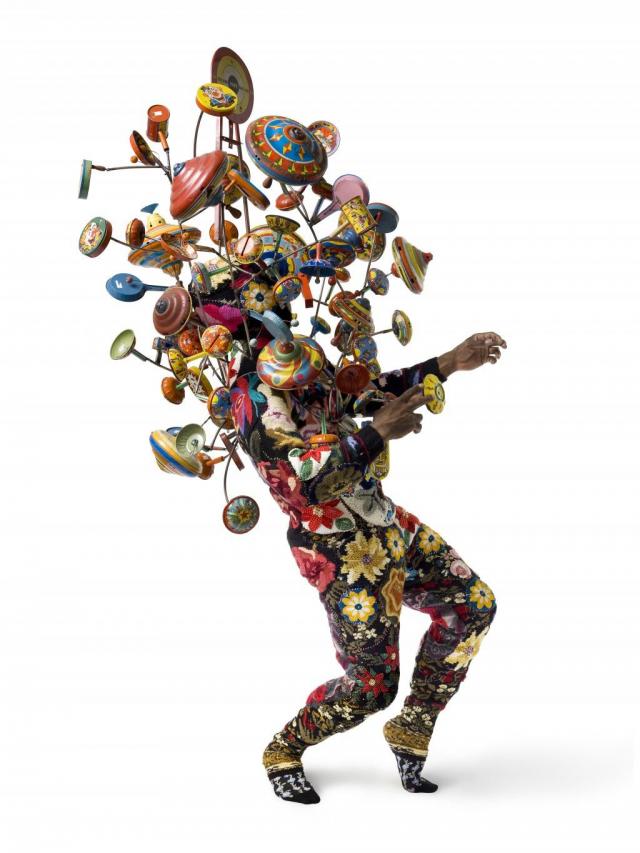 Before Cave and Wylie took the stage, the event opened with a screening of “Up Right: Detroit,” a short feature film that Cave created with a group of young adults from Detroit’s Ruth Ellis Center for homeless and at-risk LGBTQ youth. Cave is perhaps best known for his soundsuits, the surreal, wearable fabric sculptures that he first designed as metaphorical responses to the 1991 beating of Rodney King by Los Angeles police. They have evolved into vehicles of empowerment in which Cave regularly performs in collaborations with choreographers, dancers and amateur performers.

In “Up Right: Detroit,” the participants undergo a metamorphosis by being costumed in Cave’s elaborate, towering soundsuits, and then re-enter the city, transformed. Accompanied in the film by choral singers from Detroit’s Mosaic Youth Center, the silent patience of the young adults from the Ruth Ellis Center as Cave’s assistants erect colorful and elaborate soundsuits on them carries the somber weight of reflective ritual.

“It was amazing working with them,” Cave said about the young volunteers from the Ruth Ellis Center after the film’s conclusion. “Walking them through what they were about to receive, it’s transformative. It’s them sort of stripping down and being rebuilt into these shamans and going through this sort of rite of passage, this sort of ritual.”

Cave said that after the filmed performance, he presented everyone with certificates that he hoped they would carry as keepsakes to remember their participation with pride.

“I’m interested in being an artist with a civic responsibility, so I think it’s important that I get outside of myself in my work and serve a greater purpose, he told Wylie. “I think art takes a back seat for me when it comes to how I sort of approach and practice. It’s really about service first, using art as a vehicle for change.”

The inclination to combine a playful exterior with serious undertones aimed at creating a dialogue around social justice comes up frequently in his work, Cave acknowledged. The 2015 death of Freddie Gray while in Baltimore police custody, the 2012 shooting death of 17-year-old Travyon Martin, the acquittal of the neighborhood watch captain who shot Martin, and other incidents left Cave at his wits end, he said, as he struggled to process the violence against black men.

“For me, art has always been a savior,” he said. “Because it has allowed me a place to work through a lot of things, and so I think we all have to find something, some way to sort of to work it out, to get it out, … and art has always been that for me. I’ve always used it as a way to illustrate what is politically going on in the country and the world.”

Wylie asked Cave about another critically acclaimed installation and performance piece that he held in New York City this summer. Held in the Park Avenue Armory for nearly a month, “The Let Go” took on the appearance of a giant party that invited people onto a dance floor energized by a 100-foot-long sculpture of multicolored Mylar strands gliding through the celebration. In addition to the whimsical appearance of a giant game of Twister, however, the event also included a costumed performance of “Up Right” addressing police brutality, gun violence, racial inequality and identity. Named “Chase” the mylar curtain designed by Cave was intended to be reflective of police colors ‘chasing’ the colors of Africa.

According to The New York Times’ review of the performance piece, “What connects the projects — aside from their raucous, rainbow-hued color palette — is a sense of transformation.”

“The Armory was a project where I wanted us in spite of our differences to come to a place and to be able to just let go. … If you danced or not, you still had to engage with something that existed in the space in addition to all the other sort of social and community groups that were programmed every day. … It was me sort of creating this sort of hub for these convenings for us to get together, and to sort of again to work out our animosities, our frustrations, our concerns. And it was harmless.”

When Cave and Wylie opened the program up to take questions from the audience, Denzel Mitchell, a first-year student from Northumberland County, Virginia, asked Cave if he ever felt there was pressure on him to speak on behalf of black people and other minorities.

“Never under pressure, no,” Cave answered. “I don’t really think about it in those terms.  I just think it’s just part of my calling. I don’t have a choice, so I have to surrender to that as my reality and I have to sort of use this, but it’s never under pressure. I think perhaps the pressure comes into play when I’m just thinking, ‘Ugh, I don’t have the time to produce all that I need to produce right now,’ so I just have to settle and stay on course.”

As students filed out of the Paramount Theatre at the conclusion of the event, Mitchell said he appreciated the opportunities afforded to New College Curriculum students to make connections between what they discuss in their Engagements seminars on Grounds and events such as the Engagements Lecture Series.

“Watching Nick Cave’s movie, I understand what the new curriculum is trying to do even more,” said Mitchell, who is interested in studying government and foreign affairs in the College. “It’s trying to open our perspective of learning to see that it’s not just about studying the humanities or the sciences, but a combination of both. In the movie, Cave took art and used it to make a political statement. And his art involved a lot engineering and technicality, so it shows how no matter what profession you pursue, no matter what degree you pursue, we should all be able to contribute when it comes to certain issues or certain things we want to portray.”

Outside the Paramount, first-year UVA students Claire Armstrong, Emma Chin Lee, Caroline Caruso and Caroline Daniel said the opportunity to hear from a groundbreaking artist such as Cave was an example of one of the diverse viewpoints they have already explored in the first six weeks of their New Curriculum education. The semester began with a summer-reading discussion in Old Cabell Hall with author Thi Bui about her graphic novel, The Best We Could Do, about a family’s journey from war-torn Vietnam.

“It’s been kind of an eye opener,” said Armstrong, of Abingdon, Virginia. “It’s made me stop and pause in ways that I didn’t expect.” 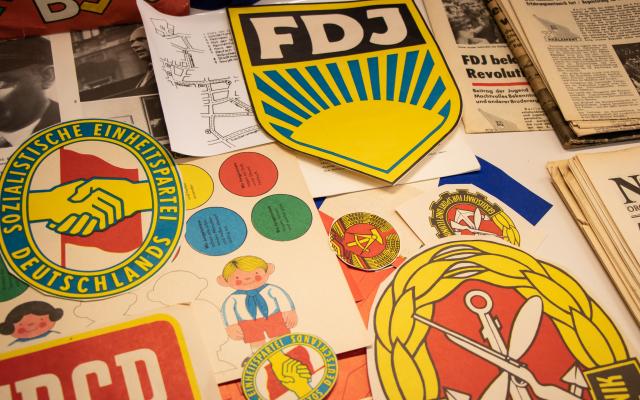 History professor Kyrill Kunakhovich worked with students from his Fall of Communism and Life in Dictatorships classes to recreate an East German living room from 1988, one year before the German Democratic Republic (GDR) collapsed.