More than 65 million people have been forced from their homes to escape famine, climate change and war. Human Flow, a 2017 documentary by Ai Weiwei that brings viewers face-to-face with some who have been affected, was simultaneously screened at 53 schools, museums and other organizations, including UVA. 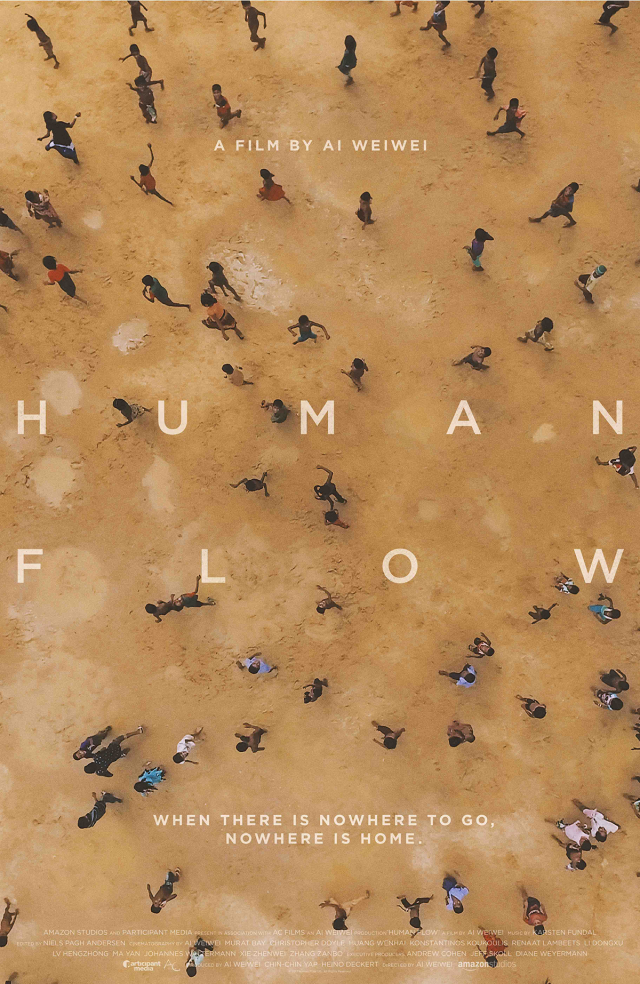 Human Flow, a 2017 documentary by the Chinese dissident artist Ai Weiwei, opens with an overhead drone shot of Syrian refugees crammed onto an inflatable raft, floating in the bright blue Mediterranean Sea. It’s a beautiful, haunting image, giving the desperate situation a false sense of calm. The raft is framed, like a portrait in a museum, by water; the bird’s-eye perspective provides the viewer distance from the people in the boat.

However, a moment later, the raft arrives on the Greek island of Lesvos and the viewer is placed amid the flurry of refugees climbing off the boat and into the shallow water, their faces mixed with relief, fear, and shock. Ai appears in the scene himself, asking the refugees about their journey, offering them tea. He serves as a kind of guide through the film, bringing viewers to 23 countries and face-to-face with men, women, and children far from home, encountering unimaginable conditions.

“One thing that I think is really important about Ai Weiwei’s work is rather than talking about an issue in a very general way, he’s actually bringing attention to the stories of people’s lives, so that we feel people’s stories and see how these are everyday people that are going through these struggles,” said Mona Kasra, an assistant professor of digital media design in UVA’s drama department, and a College Fellow in Arts & Science’s New College Curriculum.

“This film falls into all the conversation that we’ve been having with our students [in her Engagement course, New Media Art in the Age of Global Networks] which is around the role of arts in allowing us to understand the other and having empathy and just gaining new insight and perspectives,” Kasra said.

Kasra and Adrienne Ghaly, a postdoctoral College Fellow, worked with leaders of the New College Curriculum to screen Human Flow at the University on April 29, part of a national simultaneous screening event that included a live Q&A with Ai at the University of Chicago webcasted after the film. A total of 53 schools, museums, and organizations participated in the event, including Stanford University, Georgetown University, and Northwestern University. Dozens of new curriculum students, faculty, and community members, many from the Charlottesville International Rescue Committee, attended the UVA screening in Nau Hall.

Ghaly initially nominated Human Flow for the 2018-19 New College Curriculum event series, which is how she discovered the April 29 simultaneous screening of the film. The 2017-18 series included lectures by UVA alumna Margot Lee Shetterly, author of Hidden Figures; New York-based artist Mark Dion; and Harvard political theorist Danielle Allen. In May, the College Fellows approved Ghaly’s proposal; Human Flow will be screened at the Paramount Theater for incoming first-years in the new curriculum in January 2019.

Ghaly wanted to bring Ai’s work to Grounds, and especially to students in the new curriculum because “his work exceeds national boundaries, affiliations,” she said. “The refugee crisis is incredibly important, but it’s also that he is a global artist who’s addressing a global issue of great importance. It’s wonderful that a person of his sort of eminence and scope is taking on this question.”

Ai Weiwei sits with a woman in a refugee camp.
Human Flow

Ai is known for his sculptural installations and new media projects, and for his political activism and political art. His documentaries, “Little Girl’s Cheeks” (2008) and “4851” (2009) were in reaction to the Chinese government’s lack of transparency after more than 5,000 students died in an earthquake in Sichuan, China. When officials did not release information about the earthquake victims, Ai launched a crowdsourced citizens’ investigation on his blog to discover the names of the schoolchildren who died.

In April 2011, Ai was arrested at the Beijing International Airport and detained for nearly three months as part of “a government crackdown in which dozens of bloggers, human rights lawyers and writers [were] swept up,” according to The Washington Post. The U.S. Ambassador to China and members of the European Union spoke out against Ai’s arrest, museums around the world organized protests, and international artists signed petitions in support of his release. Although he was released in June of that year, Ai was not allowed to leave the country until 2015, when he moved to Berlin, Germany.

In his Q&A on April 29, Ai said the process of creating Human Flow “started naturally” when he and his son visited Lesvos to see refugee ships come in. He was immediately pulled in by refugees’ stories, he said, and began a journey to 40 refugee camps in 23 countries, interviewing more than 600 people for a total of 900 hours of footage.

“My father [Chinese poet Ai Qing] was exiled the year I was born. Maybe that’s why I care about this,” Ai said. “I quite identify with people in this position … Refugees are in unthinkable conditions. They are no different from any of us; they are just trying to move away from wars.”

Both Ghaly and Kasra said they feel drawn to the refugee crisis issue for personal reasons as well. Ghaly is half Egyptian; her father immigrated from the Middle East to Canada before she was born. “As with so many people, [his] story is one of immigration—different from this migration—but people deciding they should leave and go somewhere else,” she said.

Kasra was born in Iran just after the Iranian Revolution and immigrated to the US in 2000. She said it is difficult to visit or even imagine returning to Iran because of current political situations. “It can feel like a forced exile,” she said. “I wasn’t a refugee, but I know a lot of refugees—political and sociocultural issues forced them to leave the country that they called or they considered home ... It’s pretty close to heart.”

Human Flow emphasizes refugees’ humanity through emotional and sometimes funny interviews and quotidian details of their lives. Young boys flash the peace sign in Ain al-Hilweh, the Palestinian refugee camp in Lebanon. In Lesvos, an Afghan child playing with balloon animals yawns and squirms between her mother and grandmother, who are processing the news that the Macedonian border has closed. “What are we going to do if it’s closed?” the grandmother asks. “We can’t go back.”

“The most affecting moments for me were those involving children. The children were playing, running, and being their normal selves despite all the chaos around them,” said Sonya Sayer, a first-year student in the new curriculum who attended the screening. “It was a deep contrast that was both jarring yet visually effective.”

Ai balances these lyrical, heartrending moments with interviews with members of the office of the United Nations High Commissioner for Refugees, with newspaper headlines from around the world and statistics to quickly educate the viewer: Every day 34,000 people flee their homes; Lebanon hosts 2 million refugees from Syria and Palestine; there are currently 65.6 million people forcibly displaced worldwide, the greatest human displacement since World War II.

“The refugee crisis is so incredibly big. And it’s really hard to conceive of that. It’s hard to get your mind around that … To be able to convey through this film all of these different experiences in a way that is not overwhelming or despair inducing, but is really powerful, is really an aesthetic feat,” Ghaly said.

Human Flow pairs nicely with the new curriculum in that it incorporates the themes that make up the curriculum’s Engagement courses. “It hits all the Engagements disciplines perfectly,” Ghaly said. “It’s ethical. It’s about difference. It surely incorporates the empirical, and what do we do with empirical data when confronted with certain kinds of numbers. And then the aesthetic is clearly at the heart of the project.”

The documentary asks questions that are at the heart of the new curriculum’s “four streams of critical thinking,” Ghaly said. And then students are left to ask of themselves, What do I do with this knowledge? “And that’s an open question,” Ghaly said. “For the students to ask that question of themselves is the most important thing.”

Sayer says her biggest takeaway from the documentary to become informed. “I had heard about the refugees in Europe and the tensions building, but I did not face myself to see the reality. Human Flow showed me the struggles of millions … As a student in the New College Curriculum, this was what the professors aimed for us to discover. Whether we discuss issues through an aesthetic or empirical lens, the key point is to learn and engage ourselves with what is happening. I now want to contribute and have placed the refugee website as something on my to-do list to see what I can help in my local area.”

The Charlottesville International Rescue Committee, a cosponsor of the event, set up a table after the screening to hand out literature. Other sponsors of the event included the Office of the Provost and Vice Provost for the Arts; the Global Studies - Security & Justice Program; the Global Policy Center of the Frank Batten School of Public Policy; and the Departments of Art, Drama, English, French, German, History, Politics, Middle Eastern and South Asian Languages and Cultures.

“I was very moved by Human Flow. It depicted the amoral inhumanity of most Western nations’ responses to refugees, many of whom are displaced by crises caused by the same Western nations … I hope students next year are able to watch it as well,” said another new curriculum student, River, who preferred to go by their first name only.

During the Q&A, River asked Ai why he included himself in the film and what role he felt he played. Ai said he said he included footage of himself filming to give the movie a common thread, and to show that anyone could do what he was doing—he didn’t necessarily have any specialized knowledge about refugees but went a journey to learn more about the issues that refugees face.

“It was interesting to hear his creative process—to think that out of curiosity, he ended up embarking a journey across dozens of nations to bear witness to the experiences of thousands of people,” River said. “Ai Weiwei's film is testament to the fact that what is often called ‘the refugee crisis’ is a moral question that cannot be avoided … It is imperative for incoming first years in the New Curriculum to engage with this global reality.”

Opening image of this story courtesy of Human Flow.

From extrasolar planets to colossal stars to an infrared light mystery, University of Virginia astronomers presented their research at this month’s annual meeting of the American Astronomical Society in National Harbor, Maryland, and recently in leading journals.