Two UVA planetary scientists weigh in on some of the dramatic images of Pluto and its moons sent from the New Horizons spacecraft.

When NASA’s New Horizons spacecraft passed within 8,000 miles of Pluto on July 14, two University of Virginia scientists witnessed the event from as close as humanly possible – mission control at the Johns Hopkins University Applied Physics Laboratory in Laurel, Maryland. 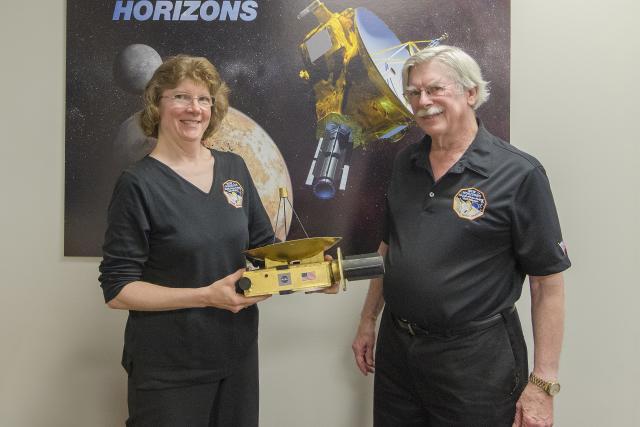 As she saw the first images arrive from Pluto, UVA planetary astronomer Anne Verbiscer said, “We’re all in awe of what we’ve seen, as well as what can be accomplished when humanity pursues its fundamental desire to explore. What we now know that we didn’t know … is that [Pluto] is an incredibly rich and diverse world that will keep us busy for years to come.”

“Pluto, we have found, is decorated with an amazing variety of landforms and frost features,” he said.

In the months since the encounter, New Horizons has continued to stream back breathtaking images from its brief encounter with Pluto and its moons: close-up views of icy mountains, glaciers of frozen nitrogen and the dwarf planet’s hazy, tenuous, but distended atmosphere. It will take until early fall 2016 for all of New Horizons’ data to be sent back to Earth.

Verbiscer and Howard have selected and analyzed a handful of the images to share with UVA Today’s readers. In the coming years they will examine hundreds more, gaining new understanding of how planets form and evolve, and, by implication, how geological processes on Earth made conditions favorable for life.

The image above, taken just 15 minutes after its closest approach to Pluto on July 14 as New Horizons looked back toward the sun, shows the deep haze layers of Pluto’s atmosphere and rugged mountains up to 11,000 feet high.

Anne Verbiscer: “This single image is definitely one for the ages.  It is without a doubt one of the most spectacular views of a planetary landscape ever returned from a robotic spacecraft. I think you’re looking at the cover of future planetary science textbooks here. The sheer variety of geologic processes is simply breathtaking: from mountain ranges rising over the horizon, to glaciers flowing, to even possible ice volcanoes. It’s got it all – a picture of unrivaled and unexpected beauty in the solar system, from an outpost farther from the sun than we have ever explored before.”

Alan Howard: “Pluto looks so welcoming in this image – mountains and plains, and a bright, clear atmosphere with just a hint of hazes. It is hard to believe that such a landscape could be so cold that the nitrogen, which is the most abundant part of [Earth’s] atmosphere, lies frozen on the surface of this distant body, forming the vast smooth plain.”

This view from New Horizons combines blue, red and infrared images. The bright expanse is the western lobe of the “heart,” informally called Sputnik Planum, which has been found to be rich in nitrogen, carbon monoxide and methane ices.
NASA/JHUAPL/SwRI

Anne Verbiscer: “This is one of those ‘wow’ images that illustrates once again the amazing diversity of terrains on Pluto, which display a broad range of compositions, colors, reflectivities and ages across the surface as a result of a variety of geologic processes.”

Alan Howard: “About 10 years ago, when the New Horizons mission was launched, it was necessary to choose what side of Pluto to visit. All that the planners had were tiny, blurry images taken by the Hubble Space Telescope. They chose to visit the brightest spot on Pluto, which turned out to be this vast expanse of frozen nitrogen surrounded by enigmatic mountains, craters and troughs incredibly more beautiful and interesting than anyone had expected.”

This composite image shows a sliver of Pluto’s large moon, Charon, and all four of Pluto’s small moons. Charon is by far the largest, with a diameter of 750 miles.

Anne Verbiscer: “Pluto’s small moons tell the story of how the Pluto system came to be. We think that Pluto and Charon formed from a collision between two Pluto-sized objects, and these small moons may be remnants from that catastrophic event.”

Anne Verbiscer: “While Pluto’s mountains, valleys and plains give us vistas reminiscent of those on Earth, the region on Charon, informally named Vulcan Planum, resembles those on our own moon.”

Alan Howard: “Charon, the cratered satellite of Pluto, is in some ways similar to other moons we have visited in the solar system. But it wears an enigmatic red hat and a unique broad crumpled sash of broken rock.”

New Horizons captured this high-resolution, enhanced-color view of Pluto on July 14, combining blue, red and infrared images taken by the Ralph/Multispectral Visual Imaging Camera. Pluto’s surface sports a remarkable range of subtle colors, enhanced in this view to a rainbow of pale blues, yellows, oranges and deep reds. Many landforms have their own distinct colors, telling a complex geological and climatological story that scientists have only just begun to decode.

Anne Verbiscer: “Here we see Pluto in all its glory, as New Horizons instantly transformed what had been only a point of light [a blurry smudge in Hubble Space Telescope images] since Pluto’s discovery in 1930 into a world we have explored.”

Alan Howard: “The color of planetary surfaces, in both our normal visible light range and in the infrared, can inform us about the materials on the surface. These colors have resulted in identification of water ice, nitrogen ices and methane ices on Pluto’s surface, among others.”

Just 15 minutes after its closest approach to Pluto on July 14, New Horizons looked back toward the sun and captured a near-sunset view of the rugged, icy mountains and flat ice plains extending to Pluto’s horizon. The smooth expanse of the informally named Sputnik Planum (at right) is flanked to the west (left) by rugged mountains up to 11,000 feet high, including the informally named Norgay Montes in the foreground and Hillary Montes on the skyline. The backlighting highlights more than a dozen layers of haze in Pluto’s atmosphere. The image was taken from a distance of 11,000 miles to Pluto; the scene is 230 miles across.

Alan Howard: “The mountaineers among the readers will have caught on to the significance of the informal names for these major peaks: Hilary and Norgay were the first to scale Mt. Everest.”

Ice, probably frozen nitrogen, that appears to have accumulated on the uplands on the right side of this 390-mile wide image is draining from Pluto’s mountains onto the informally named Sputnik Planum through the two- to five-mile-wide valleys indicated by the red arrows. The blue arrows outline the flow front of the ice moving into Sputnik Planum. The origin of the ridges and pits on the right side of the image remains uncertain.

Alan Howard: “We are used to flowing glaciers of water ice on Earth. We also see a few sluggish glaciers on Mars. But otherwise, any kind of “rivers of ice” are exceedingly rare in the solar system. The nitrogen glaciers on Pluto are very similar in appearance to glaciers in Antarctica and Greenland, save for their very different composition.” 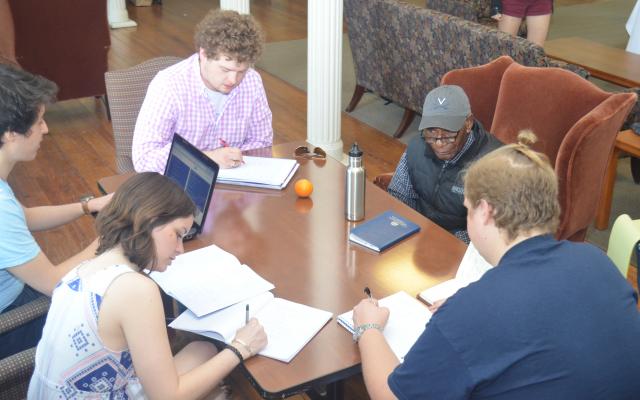