Tracey Stewart had only recently returned from 14 months of field work in Jamaica when the University of Virginia music Ph.D. student volunteered to dive into a completely different research project.

Joined by 61 other students, professors, University staff members and volunteers from the community who reported for duty with laptops, Stewart spent Wednesday morning transcribing the words of civil rights icon and former UVA faculty member Julian Bond for a new digital archive.

A founder of the Student Nonviolent Coordinating Committee that launched a wave of young black leaders in the civil rights movement of the 1960s, Bond went on to serve in the Georgia legislature, co-found the Southern Poverty Law Center and serve as chairman of the NAACP. UVA, where he taught for two decades beginning in 1992 as an Arts & Sciences faculty member, holds in its collections thousands of pages of Bond’s historic speeches, correspondence and other documents from his career.

This week’s effort – dubbed “#TranscribeBond” by its organizers from UVA’s Carter G. Woodson Institute for African-American and African Studies and its partners, the Albert and Shirley Small Special Collections Library, the Center for Digital Editing, the Scholars’ Lab and Virginia Humanities – launched with Stewart and other volunteers assembling at locations on and off Grounds for a one-day, crowdsourced push to begin transcribing Bond’s work for a new public, digital archive.

By the end of the day, Stewart and the other volunteers assembled in Minor Hall, the Scholars’ Lab in Alderman Library, the Virginia Center for the Book at the Jefferson School City Center and a Shenandoah Joe coffee shop in Charlottesville had transcribed 1,202 pages of Bond’s papers for a publicly accessible, online archive.

“The legacy of Julian Bond drew me here. With social justice and the need for the things that he was talking about back in the ’60s, it’s kind of startling, and sometimes depressing, that there is still a need for some of those same conversations in 2018,” said Stewart, who was transcribing a decades-old speech about the need for proper health care in the black community and the economic disparities between the black, working-class poor and white communities. “It’s really interesting, going through his own thought process and writing things out and seeing how he crosses things out [in his speech drafts] and changing direction slightly, working through what he wanted to say and trying to say it as clearly as possible.”

Fellow volunteer Althea Brooks, who joined Stewart in Minor Hall Wednesday morning, said it was remarkable to think about Bond’s life experiences as she transcribed drafts of a series of op-ed pieces that he wrote for The Washington Post.

“To think about where he was at that point in his life, and what he was doing in the 1960s in the civil rights movement. Possibly sit-ins at cafes, SNCC, etc. It’s interesting to read his thoughts in his own handwriting,” said Brooks, senior director of lifetime learning for UVA’s Office of Engagement.

An Opportunity to Engage

Wednesday’s volunteer effort fell on the third anniversary of Bond’s death at the age of 75.

Deborah McDowell, Alice Griffin Professor of English and director of UVA’s Carter G. Woodson Institute for African-American and African Studies, said the transcription event and Tuesday’s kickoff reception were timed to offer the broader community an opportunity to reflect not only on the anniversary of Bond’s death – and on last year’s tragic events of Aug. 11-12 – but also to engage with the work of one of the foremost leaders of the civil rights movement.

The project coincides with the establishment by UVA’s College and Graduate School of Arts & Sciences of the Julian Bond Professorship of Civil Rights and Social Justice. As many as 350 alumni, parents and friends contributed to the creation of this newly endowed professorship. Kevin Gaines, who is completing a global history of African-Americans, was recently named to the position and was jointly appointed in the Woodson Institute and the Corcoran Department of History.

Transcriptions from the ongoing project eventually will be used for the publication of “The Essential Julian Bond” in addition to an online archive that will open the valuable primary sources to a public interested in learning more about Bond’s contributions.

“Laypeople are intellectuals themselves, but they may not be as likely to go into an archive and ask for ‘Box Number 450,’” McDowell said. “So, this is a way for people to apprise themselves of the length and breadth of the work that Julian Bond performed throughout his 50 years of service.

Bond’s daughter, Phyllis Bond McMillan, attended a Tuesday reception that served as the official launch of #TranscribeBond. It was her first visit to UVA, but she said her father enjoyed his time teaching on Grounds; Bonds taught more than 5,000 students drawn to his popular “History of the Civil Rights Movement” course offered by the Corcoran Department of History.

During his two decades on Grounds, Bond also co-directed the University’s “Explorations in Black Leadership” oral history video collection, which he, along with co-director and history professor emerita Phyllis Leffler, published as a book in 2014, “Black Leaders on Leadership: Conversations with Julian Bond.”

His contributions to University initiatives continued after his teaching tenure concluded. In 2015, he led his ninth “Civil Rights South Seminar,” a popular tour that took participants to Atlanta, Birmingham and Selma, Alabama, as well as other landmark sites from the civil rights movement.

“I hope this will create more awareness of who he was, what he stood and fought for his entire life,” said Bond McMillan, a consultant who works in Atlanta. “The public transcription of his documents, which until today were only available in hard copy form, will now be available to anyone on the planet who has access to a computer. They can learn about Julian Bond and access his papers. What a gift.”

A recent arrival to the University this summer as a postdoctoral fellow at the Woodson Institute, Claire Payton applauded the effort to make transcribing Bond’s work a community effort. As she transcribed Bond’s words from a 1968 speech touching on racism, the obliviousness of politicians and his disappointment in the breakdown of the unity of the left, Payton said she found herself getting caught up in the rousing words as she imagined him delivering them.

“This is the most labor-intensive part, so a lot of times things we don’t get past this because the labor is not there or the time is not there. Trying to create community momentum around a set of papers, pushing people to get it done – I think that it’s brilliant,” Payton said. “I’ve gone to events where people get together to create Wikipedia pages around social justice issues or women scientists. That sort of crowdsourcing together to create a knowledge base that you want to see in the world is really cool. I don’t know any of these people volunteering, but we’re all here in this common place.”

One seat down from Payton at the Virginia Center for the Book sat David Mattern, who recently retired as senior associate editor of UVA’s Papers of James Madison Project. An experienced archivist, Mattern was transcribing a 1971 speech to the Racial Harmony Council on the traditional difficulties faced by black people. Typed by Bond in all caps, the draft compared the “millionaire welfarism” given to white, gentleman farmers, such as a U.S. Senator from Mississippi, to the welfare benefits given to the poor:

“SUPPOSE, FOR EXAMPLE, THAT AN <u>ADC</u>MOTHER WAS PAID NOT TO PRODUCE AT THE SAME RATE THAT THE GENTLEMAN FARMER <sup>from Mississippi </sup>SENATOR JAMES O. EASTLAND IS. THAT WOULD MEAN THAT WELFARE MOTHERS IN DETROIT OR CHICAGO OR LOS ANGELES COULD COLLECT AS MUCH AS $125,000 A YEAR FOR NOT HAVING BABIES.”

“I’m of the age where I followed Julian Bond’s career over the years, and this is like reliving my youth here,” Mattern said. “This is a treat, volunteering. It’s fun to be in a group. Most of my archival work with the Madison Project was pretty solitary. It wasn’t collegial and in a big group like this.”

Jennifer Stertzer, director of the Center for Digital Editing and senior editor of The Washington Papers project, said the crowdsourcing platform for the #TranscribeBond effort will remain open to allow volunteers to continue to contribute. (Those wishing to participate can log in remotely by accessing the project workspace and engaging with the hashtag #TranscribeBond.)

“If you want people to be interested in the humanities, you have to let them be involved in them,” she said.

Explorations in Black Leadership
The Papers of Julian Bond, Center for Digital Editing 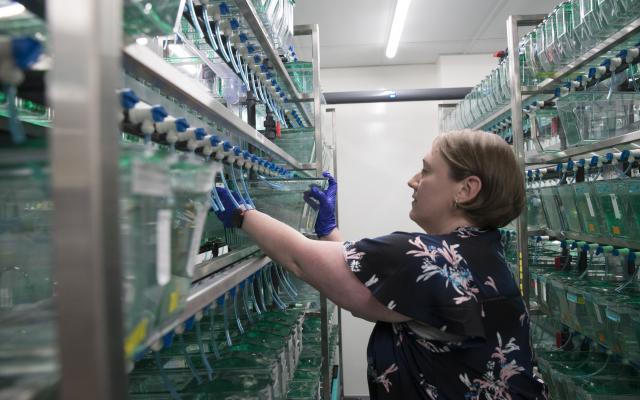 Zebrafish Lab Provides Insights Into Diseases of the Nervous System

Sarah Kucenas’s fish facility now includes its own water-treatment plant and can house up to 50,000 fish and hundreds of tanks in a 1,300-square-foot area,