Jehovah. Allah. Brahma. Ra. Atma. Zeus. God. Names given by people across time and culture to represent a divine creator, a source of ultimate power and will. They’ve been used to inspire generations to connect with something greater than themselves, as well as to fuel centuries of holy wars, religious persecution and terrorism, excuses for death and division within a world of different belief systems. 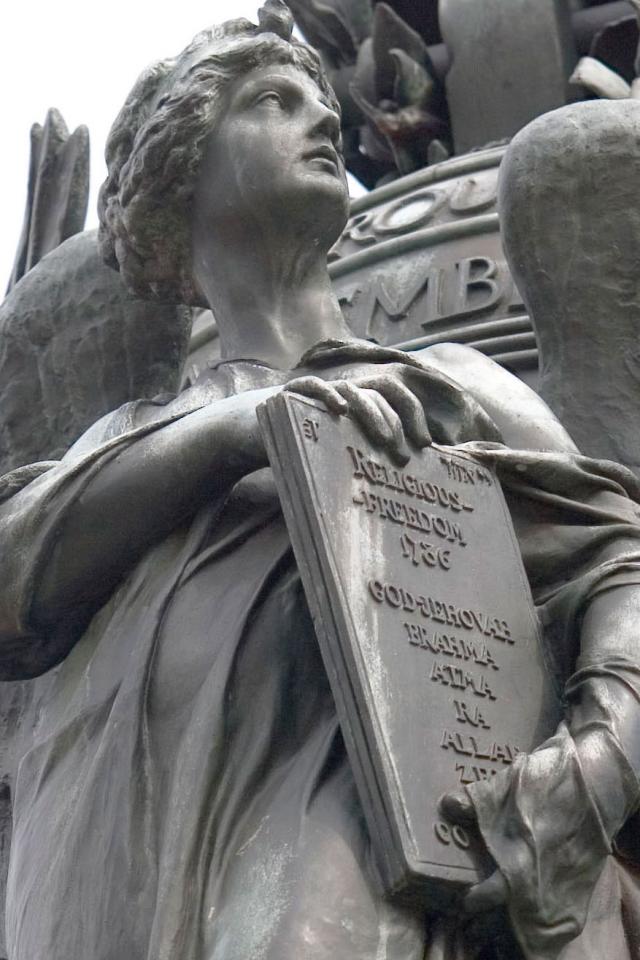 Statute of Thomas Jefferson on the north side of the Rotunda

But unbeknownst by much of the University of Virginia community, you can find these names etched side-by-side in a detail of the famous Thomas Jefferson statue that adorns the plaza on the north side of the Rotunda. Sculptor Moses Ezekiel carved the names on a tablet held by one of the statue’s symbolic spirits, to serve as a testament to Jefferson’s vision for religious freedom in the newly established United States of America.

“I remember being astonished,” said W. Scott Harrop, an adjunct lecturer in the U.Va. Woodrow Wilson Department of Politics and the Department of Middle Eastern and South Asian Languages and Cultures, who investigated the tablets after a visiting professor pointed out the various names for God. “I asked [Sandy] Gilliam, [Larry] Sabato, even [Ruhi] Ramazani, who’s been here since 1954, and they’d go, ‘What? The name Allah is on the side of the Jefferson statue? Zeus? Ra?’ There are Jewish symbols on the scroll, the Hindu ‘aum’ symbol; to really interpret everything you need an expert on comparative religions.”

Harrop went digging through the Special Collections Library, Ezekiel's forgotten autobiography and other old sources, where he unearthed letters between Ezekiel and his father that helped explain the meaning behind the four spirits surrounding the bell of the Jefferson statue. They embody four Jeffersonian ideals – Justice, Liberty, Equality and Religious Freedom.

On a tablet in the hands of the last figure, Ezekiel carved the deity names to show that “under our government, they mean, and are all God – and have no other meaning and have each an equal right and protection of our just laws as Americans,” he wrote.

The tablet, titled “Religious Freedom, 1786,” is a tribute to the Virginia Statute of Religious Freedom, one of the three legacies Jefferson chose to be carved on his tombstone (the other two being the Declaration of Independence and the founding of the University of Virginia).

Ezekiel, a Richmond native who faced anti-Semitism through much of his life, came to consider religious liberty the greatest of the founding fathers’ achievements.

He was the first Jewish man to enroll in the Virginia Military Institute, where he became fast friends with roommate Thomas G. Jefferson, a great nephew of the U.Va. founder. They continued their friendship on the battlefield, where Jefferson died in Ezekiel’s arms as the future sculptor read aloud from the Gospel of John.

After the Confederacy fell, Ezekiel studied sculpting in Berlin and then Rome, where he was forced to live in the Jewish ghettos, a “place of tears” and crushing poverty. He came to cherish his American roots, ingrained in Jefferson’s pioneering vision for the right to life, liberty and the pursuit of happiness.

As he grew famous as a sculptor, many of Ezekiel’s major works featured themes of faith, Israel and religious freedom. After he was commissioned to create the Jefferson statue for Jefferson County, Ky., he kept the molds and began fundraising efforts toward donating a twin statue to the University of Virginia, in honor of the president who had inspired much of his life’s work.

The statue depicts Jefferson reading from the Declaration of Independence atop a liberty bell, while his four core ideals for America surround its base. Ezekiel dubbed the religious liberty figure, which faces west toward the University Chapel, “Vox Populi, Vox Dei,” or “the voice of the people is the voice of God.”

The Jefferson sculpture was unveiled at U.Va. Final Exercises in 1910; then-President Edwin Alderman proclaimed that endless generations of students would be inspired by this allegorical “sermon in stone” that the statue represented. But for the most part, the story has remained buried in the stacks of Alderman Library.

“We need to be thinking about Jefferson’s echoes for today,” said Harrop, who seeks to integrate Jeffersonian thought into his classes on struggles for freedom in the Middle East.

“For Jefferson, this was all about the survival of democracy – not just here in the U.S., but the whole world, having free education available to everyone,” he said. “We have a healthier democracy if people are able to think for themselves.”

An article on these findings was originally published by W. Scott Harrop in the Spring 2012 issue of U.Va.'s Middle Eastern and South Asian Languages and Cultures newsletter.