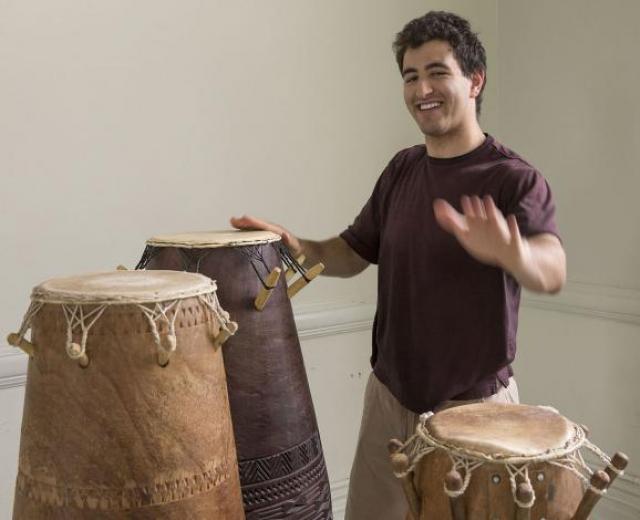 Alan Brody is exploring new ways of teaching music – and he’s drumming up student enthusiasm for other cultures in the process.

Brody, who graduated from the University of Virginia in December as a physics and music double major, received a University Award for Projects in the Arts last year, which he used it to expand how African music is taught.

He conducted clinics with the U.Va. Arts Mentors group, Tandem Friends School in Charlottesville and for students at Brandeis University.

“We learned the drumming, dancing and singing of the Ewe people of Ghana and Togo, as well as singing of the BaAka people from the Central African Republic,” Brody said. “Non-Western music study leads to inter-cultural understanding and performance possibilities that make for a more well-rounded musician and human being.”

He cited Ewe drumming as a great example.

“Ewe drumming is not complete without an ensemble of drums, and each drum plays its own unique rhythm,” Brody said. “This feature allows for new analogies to Western music, such as a different understanding of ‘heterophonic music,’ or several voices playing simultaneously, but with contrasting rhythms and pitches, and creates analogies to extra-musical concepts about conversation and space.”

Brody, 22, of Arlington, said everyone participates in Ewe musical events.

“Participation does not only take the form of what a foreign eye may deem as performance, such as drumming, dancing or singing, but also includes clapping, chatting, laughing, many things that could be considered noise, and more,” he said. “Whatever takes place in the context of the musical event is part of the performance. This idea outlines how radically different the audience is treated between cultures and is grounds for critical discussion.”

The trick, he said, is being able to convey the essence of something that is very different from that with which his students are familiar.

“The important results came from discovering effective teaching methods for non-Western music, as well as ways to include new technology and discussion as part of the curriculum,” he said.

Brody recorded the instruments one by one and played them back for the group as members learned dancing and singing. He controlled the playback through an application on his iPhone.

“This allowed me to be involved as a dancer and not be stuck behind the computer during the clinic,” Brody said. “Finally, Nintendo Wii remotes were used and programmed so that students holding the Wii remotes and dancing would affect the sounds based on their movement.”

Over the course of the project, Brody unearthed multiple perspectives, or what he called ”pluralisms,” in regard to teaching, learning, performing, discussing and maintaining the learning environment of the clinics.

The several distinct rhythms in the drum ensemble exemplified the multiple perspectives within the learning and performing processes, he said.

“The coexisting perspectives were a positive discovery,” he said. “In the case of music learning, training the participant to perceive two or more simultaneous parts highlights interdependence of individual rhythms in Ewe music and in BaAka singing.”

Brody, who performed as a dancer and technologist in the Mobile Interactive Computer Ensemble, U.Va’s computer music band, is a “unique and highly capable musician,” said Matthew Burtner, associate professor in the McIntire Department of Music and Brody’s adviser on the project.

“Through dance, music and technology, Alan created an impressive educational platform and community outreach project,” Burtner said. “He is fun to work with, infinitely energetic, and I admire his focus on ways that higher education can positively serve our society.”